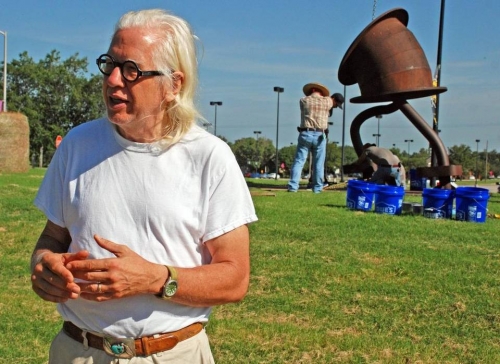 On the tee box of the former Braeburn Golf Course’s sixth hole, it’s impossible to tell where golfers once stood to launch balls down the par-3 hole.

Now, a massive steel man has been bolted into the tee box with bales of hay surrounding him. The figure itself is shocking hay.

It’s only appropriate, then, that the traveling Tom Otterness sculpture “Makin’ Hay” has been temporarily installed at Wichita State University, home of the Shockers.

The sculpture, which is on loan to the Ulrich Museum of Art through the Alturas Foundation in San Antonio, Texas, will be the first completed project of the school’s innovation campus.

Three steel men are being installed around the corner of Mike Oatman Drive and Perimeter Road and wrapped in hay. The tallest sculpture is around 18 feet tall. There are also multiple hay bales sitting around, arranged in position by Otterness himself.

Otterness, a Wichita native, first made “Makin’ Hay” in 2002 for a hay-bale sculpture contest near Utica, Montana. It was purchased by Alturas and now travels across the country. It has previously been installed on the Stanford University campus in California, and most recently it was in a hay field in Bentonville, Ark.

The prairie grass hay used in the sculpture at WSU comes from Honeydew Hay, in Derby.

It will be the second Otterness piece on WSU’s campus, as his “Millipede” was added permanently on the south side in 2008.

“Wichita may be having enough of me soon – it’s a lot,” Otterness said, referencing his large sculpture that has traditionally sat in front of the Wichita Art Museum, “Dreamers Awake.”

Though Otterness lives in New York, he said he is always glad to bring his pieces back to his hometown.