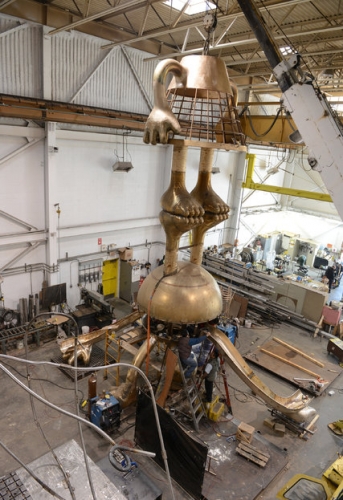 In the late 1990s, the sculptor Rona Pondickarrived at Dick Polich’s foundry with some challenging goals. She was working on her now-famous animal-human hybrids and was interested in new ways of incorporating color in stainless steel. She recently recalled explaining her project to Mr. Polich: “He told me, ‘You’re trying to push the envelope, and I’ll go there with you.’ And then he said, ‘And while I’m going there with you, can I show you a few things I’m playing around with?’ ”

The determination to solve problems and a keenness to experiment have characterized Mr. Polich’s decades-long work as a pioneer in providing artists with the industrial capabilities and technological expertise required to realize their visions in metal. Since he opened his first art foundry in the late 1960s, he has helped produce thousands of sculptures for roughly 500 artists, among them Louise Bourgeois, Alexander Calder, Nancy Graves, Jasper Johns, Roy Lichtenstein, Louise Nevelson, Isamu Noguchi, Richard Serra and Frank Stella.

Mr. Polich, 82, spends his days at Polich Tallix Fine Art Foundry, the 105,000-square-foot factory in Rock Tavern, where his business has been located since 1996. A trim man with a quick wit and an intense focus, he brings a reservoir of energy as well as a range of experience to his roles as craftsman, scientist, innovator, businessman and collaborator.

The son of Croatian immigrants, Mr. Polich attended Yale University on a football scholarship, graduating with a degree in economics. After a stint in industry, and another as a pilot in the Navy, he enrolled at the Harvard Graduate School of Design to study architecture. He withdrew after a year and began working at a foundry at the Massachusetts Institute of Technology, where he earned a master’s degree in metallurgy. After that, he returned to industry and soon became general manager at the aerospace manufacturer Bendix Corporation. He lasted only a few years.

“One day I got to my office and found an order for 50,000 gas-mask valves,” he said. “And I said, ‘I’m going to do something else with my engineering degree.’ So I quit and started my own foundry.”

The name Tallix is derived from the word “metallics.” Polich Tallix is the current version of a series of foundries that Mr. Polich has had in Peekskill and then Beacon before landing in Rock Tavern, about 60 miles north of Manhattan.

The plant is a bustling, multifaceted environment where assorted metals are cast and fabricated into works of art that encompass everything from palm-size objects to projects so large they must be assembled outdoors. One afternoon in January, machines were screeching, sparks were flying and 74 employees were working on dozens of sculptures-in-progress. Gigantic waxen lumps that would eventually become one of Jeff Koons’s “Play-Doh” pieces sat in the middle of the sprawling floor not far from a pair of cartoonlike bronze figures from Tom Otterness’s “Cone Sculpting Sphere.” Hanging on a wall nearby were several gleaming metal sheets, mock-ups for facades designed by Tod Williams Billie Tsien Architects for the United States Embassy in Mexico City.

In the 3D printing lab, technicians were using digital processes to create a scale version of Do Ho Suh’s “Karma,” a 23-foot-high bronze tower composed of a standing human figure carrying on his shoulders a column of crouching men perched atop one another, each smaller than the one below. “We’re reducing it to 30 inches,” Mr. Polich said. “The figures at the top are only 0.003 inches. You can’t make them in clay, but you can make them.”

Mr. Polich prides his foundry on offering cutting-edge technology and alloys and maintaining high standards of craft. He described his management style recognizing the strengths of individual employees.

“There’s the typical pyramid of authority with me at the top,” he said. “But there are also pyramids of authority based on skill and craft. The guys at the top of those pyramids — everybody knows who they are.”

The result is a sense of communal support. “If you can’t figure out a way to do something, we all get together and figure it out,” Mr. Polich said. “In that conversation, I’m just one of the guys with an idea.”

In keeping with the time-honored responsibility the foundry feels to execute artists’ concepts, Mr. Polich is adamant about the distinction between artist and artisan.

“We are artisans,” he said. “We have to have an intimate connection with the feelings and needs of the artists who work here and what their projects require. We make no aesthetic decisions, and our goal is to leave no fingerprints behind.”

Yet Mr. Polich clearly has left fingerprints — on the foundry’s internal culture, on its impressive roster of clients, on the sculptures around the world that he has helped to create, and on the possibilities now available for converting metal into art. While he has not announced plans to retire, he has chosen his successor: Adam Demchak, a 33-year-old engineer who joined Polich Tallix a year ago.

When Ms. Pondick learned of that decision, she became a little wistful.

“I have great sadness that I didn’t start working with Dick when he was younger,” she said.

“There aren’t many people who have that kind of what-if, how-can-I, never-satisfied attitude.”

For his part, Mr. Polich is confident that the systems and principles he has instilled in his foundries for 45 years will endure. “When I value someone, you know how I show it?” he said. “I teach them. That’s what we do here.”