NEW PALTZ -  The Dorsky Museum is delighted to present Dick Polich: Transforming Metal into Art, an exhibition of work by some of the most important artists of our time who have worked with Hudson Valley Master Dick Polich. Organized by the Samuel Dorsky Museum of Art at the State University of New York at New Paltz, the exhibition will be on display from Aug 27 through Dec. 14, 2014, in The Dorsky’s Morgan Anderson, Howard Greenberg Family, and Corridor Galleries. The public opening reception is Saturday, Sept. 6, 5–7 p.m.

Dick Polich: Transforming Metal into Art is the first museum exhibition to survey the career of Polich, one of the world’s principal art fabricators who, like others in his profession, remains behind the scenes. The exhibition, curated by Daniel Belasco, the curator of exhibitions and programs at The Dorsky Museum, reveals how Polich has impacted the development of contemporary art by opening up the industrial process of metal casting and fabrication to accommodate the creative choices of artists.

The exhibition consists of three sections. The first section interweaves a history of Polich’s foundry leadership from 1969 to today with 11 carefully selected works of art that reveal the transformations in style, technique, and medium fostered by Polich. The second section presents an in-depth video documentary about the Polich Tallix Fine Art Foundry by artist Stephen Spaccarelli. The third section delves into the techniques and materials of contemporary foundry work. A witty installation by Otterness demonstrates all the steps involved in making a bronze sculpture with Polich.

Polich is being featured as a part of The Dorsky Museum’s “Hudson Valley Master” series, which has honored Robert Morris, Don Nice, Leslie Dill, Judy Pfaff, and Carolee Schneemann with one-person exhibitions that provide an in-depth survey of a selected artist’s career and current work. The exhibitions are accompanied by scholarly catalogues that become part of a permanent archive documenting the region’s rich contemporary art scene.

The fully illustrated, 106-page catalogue documents the exhibition and surveys Polich’s work with artists since the 1960s. Belasco contributes a scholarly art historical survey of 50 years of work produced by Polich and his foundries. Polich contributes a statement on craftsmanship and metal casting. Participating artists, including Antoni,  Koons, Otterness,  Pondick,  Puryear, and  Shapiro, contribute personal statements about collaborating with Polich. Longtime employees Vanessa Hoheb and Thom Joyce provide behind-the-scenes descriptions of Polich’s energy and influence. Additional materials include a list of the nearly 500 artists who have made art with Polich, and a world map locating over 100 public monuments and sculptures produced in his foundries.

Public programs on the SUNY New Paltz campus this sall include a gallery talk on the properties of metals by Polich and a conversation between Polich and artists with whom he has worked closely. A panel discussion by artisans at the foundry will discuss the experiences and challenges of being the maker of an artist’s work. 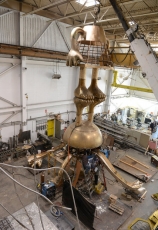 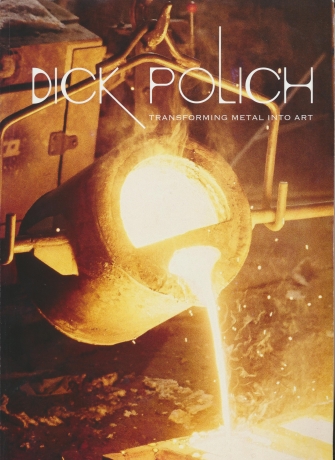 Published on the occasion of the exhibition Dick Polich: Transforming Metal Into Art, curated by Daniel Belasco, on display from August 27- December 14, 2014 at The Samuel Dorsky Museum of Art, State University of New York at New Paltz.